This is English rules of "Battle of Nomonhan", a free postcard game presented by Command Magazine Japan Edition (CMJ) in 2012.

This game deals with only July offensive in the Battle of Nomonhan.

Cut off counters (eleven in total) and use them. Some counters have the reverse side. 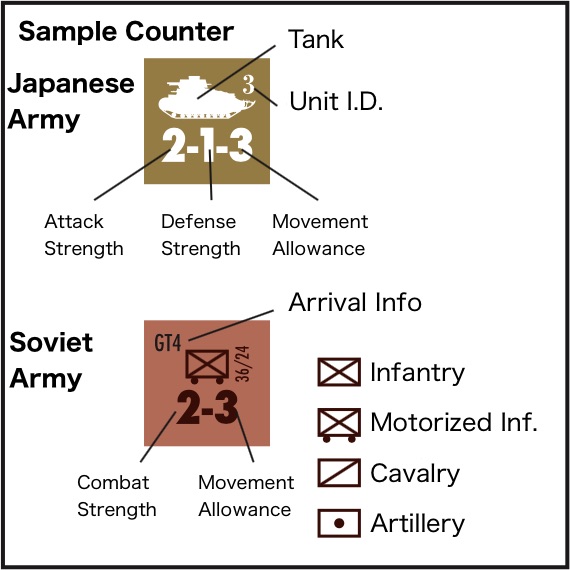 If the Japanese Army removes Soviet Artillery, the game immediately ends with Japanese winning. If the Soviet Army removes both of Japanese Tanks, the game immediately ends with Soviet winning. If neither meets the condition until the end of the game, a player who scored points higher than opponent wins.
Tanks (counters with silhouette)...... two points per step.
Infantry/Cavalry (counters without silhouette)...... one point per step.

Repeat "Turn" to progress. A sequence of one Turn is as follows:

Roll a die at the end of Turn 6 and 7. If rolling the same number as printed on the Game Turn track, the game immediately ends.

Six hexes adjacent to a counter are called "Zones of Control (ZOC)". If a counter enters an enemy ZOC during Movement, it stops there. Except for Retreat, exiting an enemy ZOC is not allowed. ZOCs do not extend across the river unless there is a bridge.

Counters may move during friendly Movement Phase. Crossing a bridgeless river is not allowed. Only Infantry/Cavalry may cross the pontoon bridge (between hexes 0207-0308). If there is a Japanese Army's unit in hex 0207 and/or hex 0308, Japanese Army may declare the blast of pontoon bridge anytime during friendly Movement Phase.

Putting two or more counters in one hex is not allowed (no stack).

A counter printed "GT #" enters a hex printed friendly flag in the friendly Movement Phase of the Turn. If there is an enemy counter in the hex, it must postpone entering.

A counter in an enemy ZOC during friendly Combat Phase must attack. During one Combat Phase, each attacking unit may attack once and each defending unit is attacked only once. First of all, decide all combinations, and then resolve each Combat. Both the attacker and the defender roll a die the same times as the sum of Combat Strength of friendly unit participating in the Combat. A roll of 5 or 6 is a "hit". Compare the attacker's hits with the defender's hits. The lower side suffers from the same damages as the difference between the hits. If they are the same number, neither is damaged.

A unit in a Hill need not attack. In case of an attack against a Hill, only a roll of 6 is a hit.

Soviet Artillery may support one attacking within three hexes. Add one to Soviet Combat Strength at this time.