This is English rules of "Shinsengumi Ikedaya Incident", a free postcard game presented by Wargame Japanese History magazine in 2009. Original webpage is here.

A game of "Ikedaya Incident". Counters of Shinsengumi Chronicle are usable.

<Competences of the Counters> †

Ronin: Seven counters in Street Side Rooms, the others in Corridor and Backyard Side Rooms.
Shinsengumi: All in Entrance.

Ronin player places first. Putting a maximum of three counters per square is allowed. Piling counters up is called "stack". 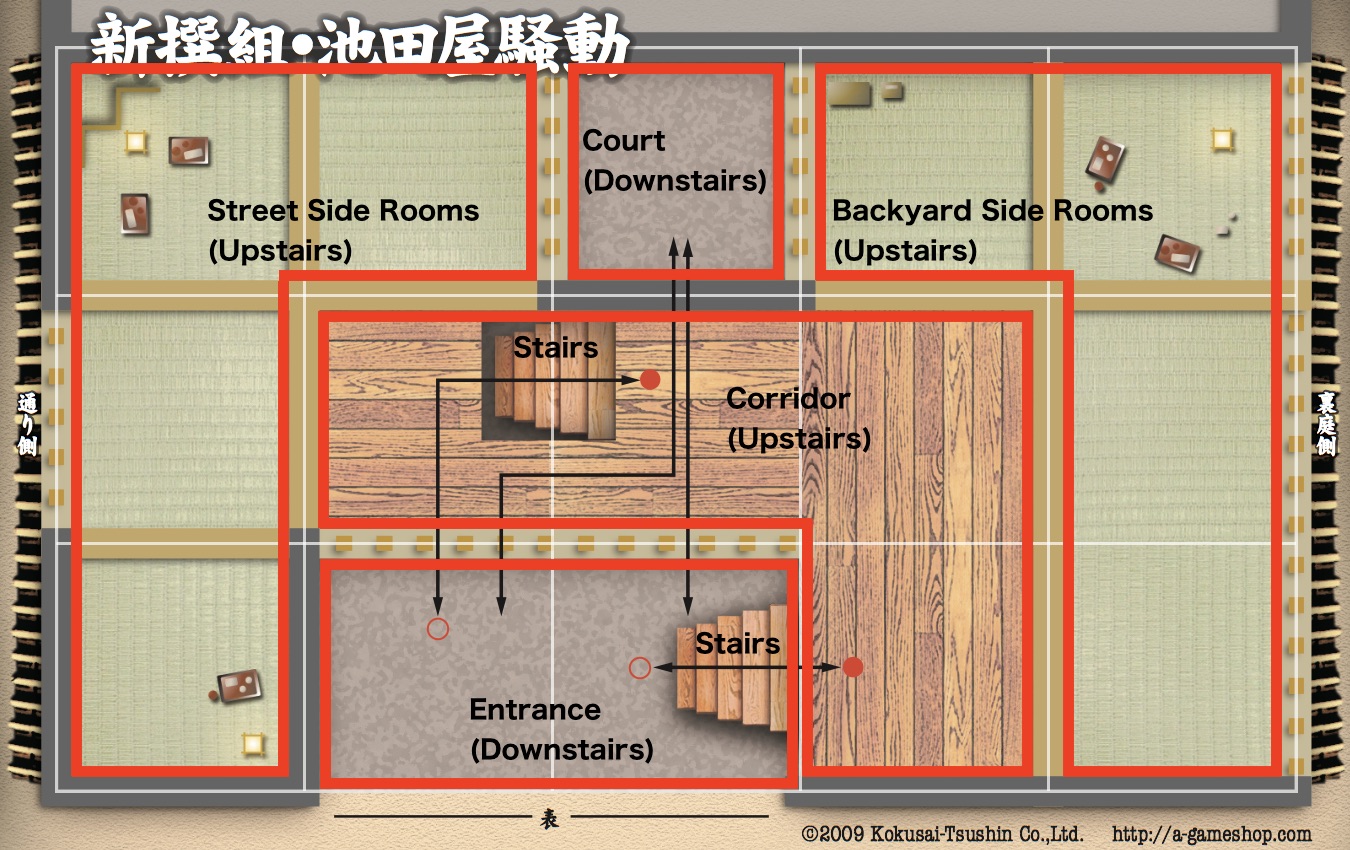 After finishing all the following Phases, one Turn ends and a new Turn begins:

1) Action Phase: Each player performs Movement (and Combat) of one unit/stack one after the other (Shinsengumi first). Rotate counters to indicate that they finished Movement. This Phase ends if both players pass sequentially or every counter finished Movement.

Repeat Turn until every Ronin unit is removed or escapes.

If a counter enters a square adjacent to another square which is the same floor and contains an enemy counter, it must stop (diagonal square is not adjacent). Entrance and Court are considered to be adjacent.

Squares connected with an arrow and printed ● or ○ are adjacent via Stairs, but a counter in such a square cannot stop enemy counters in different floor (Combat is allowed).

A counter which is adjacent to an enemy counter in the same floor from the beginning cannot move.

Combat always occurs if a counter become adjacent to an enemy counter in the same floor.

If a loser's counter survives, it must retreat one square. On this occasion, it cannot retreat into a square adjacent to an enemy counter. If a counter cannot retreat, it is removed.

After the combat ends, all the winner's counters must enter the square where was the loser's counters.

If a counter with a skill of "Swordsman" participates in the combat, may roll a die one more (may roll four times maximum).

If there is a Door between the both sides, the defender (non-phasing player) may roll a die one more (four times maximum. If there is a "Swordsman", five times maximum), but if the opponent has a skill of "Sword" or "Spear", this effect is canceled.

On and after Turn 2, Ronin side may jump from the upstairs to the downstairs. In the Ronin side's Action Phase, Ronin player selects one counter in a square with a Railing and makes it "escape" instead of Movement and Combat. Roll a die. If rolling a 1, it is captured by Shinsengumi in the downstairs (removed). If it jumps to Backyard or Street (and rolling a 2 or more), it is removed and considered to succeed in escaping. If it jumps to neither Backyard nor Street, the action ends. A counter in the downstairs may escape from Entrance by Movement.

A Ronin counter with a skill of "Light" may add one to the die roll of escape.

Even a counter adjacent to a Shinsengumi counter may try to escape, but subtract one from the die roll.

If Okita Sōji takes his action, roll a die. Okita may take his action only if a 4-6. If a 1-3, Okita ends his action. If a stack including Okita takes their action, other counters may take their action even if a 1-3.

Q1: If there are two or more adjacent squares containing an enemy counter after Movement, how to do Combat?
A1: Phasing player selects one target square of attacking.

Q2: If two or more Shinsengumi counter move out of the map, is the die roll modifier to prevent from escaping accumulated?
A2 Yes.

Q3: If a Ronin counter may move from the current square to Entrance without entering a square adjacent to an enemy counter, may it escape without stopping?
A3: Yes.

Q4: After passing once and the opponent takes action, if there is a counter which has not taken action yet, does it take action?
A4: Yes.

Q5: If a Shinsengumi counter moves out of the map and a Ronin counter jumps to Court, is the die roll subtracted?
A5: No.